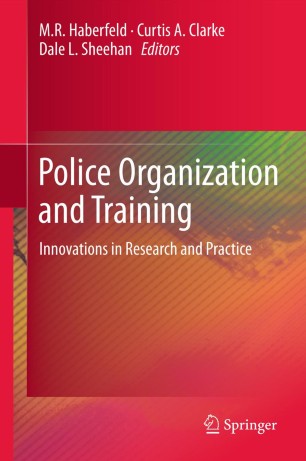 Innovations in Research and Practice

Criminal enterprises are growing in sophistication. Terrorism is an ongoing security threat. The general public is more knowledgeable about legal matters. These developments, among others,necessitate new methods in police work--and in training new recruits and in-service officers. Given these challenges, improvements in training are a vital means of both staying ahead of lawbreakers and delivering the most effective services to the community.

Police Organization and Training surveys innovations in law enforcement training in its evolution from military-style models toward continuing professional development, improved investigation methods, and overall best practices. International dispatches by training practitioners,academics, and other experts from the US, the UK, Canada, Germany, Hong Kong,and elsewhere emphasize blended education methods, competency-building curricula, program and policy development, and leadership concepts. These emerging paradigms and technologies, coupled with a clear focus on ethical issues, provide a lucid picture of the future of police training in both educational and law enforcement contexts. In addition, the book's training templates are not only instructive but also adaptable to different locales. Featured in the coverage:

Police Organization and Training is a key resource for researcher sand policymakers in comparative criminal justice, police and public administration, and police training academies. It also has considerable utility as a classroom text in courses on policing and police administration.

1. Maria (Maki) Haberfeld is a Professor and Chair of the Department of Law, Police Science and Criminal Justice Administration at John Jay College of Criminal Justice in New York City. She was born in Poland and immigrated to Israel as a teenager. She served in the Israel Defense Forces in a counter-terrorist unit and left the army at the rank of a sergeant. Prior to coming to John Jay she served in the Israel National Police and left the force at the rank of lieutenant. She also worked as a special consultant for the U.S. Drug Enforcement Administration in the New York Field Office. She has conducted research in the areas of public and private law enforcement, integrity, and white-collar crime in the United States, Eastern and Western Europe and Israel. In addition to her research, she has also provided leadership training to a number of police agencies. Since 2001 she has been involved in developing, coordinating and teaching in a special educational program at John Jay for the New York City Police Department. Her recent publications include: Critical Issues in Police Training (2002, 2011), Contours of Police Integrity (co-editor, 2003), the International Volume of Sage’s Encyclopedia of Law Enforcement (volume editor, 2004), Police Leadership (2005), Enhancing Police Integrity (co-author, 2006), and Comparative Policing: The Struggle for Democratization (co-editor, 2007). Her latest works include three books on terrorism related issues: A New Understanding of Terrorism (co-editor, 2009), Modern Piracy and Maritime Terrorism (co-editor, 2009), Terrorism Within Comparative International Context (co-author, 2009), Russian Organized Corruption Networks and their International Trajectories (co-authored, 2011) and Police Organization and Training (co-edited) forthcoming September 2011.

2. Dr. Curtis Clarke received his Ph.D. from York University in 2000. His doctoral dissertation examined the manner in which the RCMP, Metropolitan Toronto Police Service and the Edmonton Police Service implemented organizational restructuring under the guise of Community policing and fiscal restraint. Dr. Clarke’s law enforcement experience has spanned the realm of operational policing (Constable- Kingston, Ontario), to that of, Director: Police and Peace Officer Training and Curriculum Development for the Alberta Solicitor General and Public Security (SGPS). He currently is the Director of the Alberta SGPS Staff College. Prior to joining the Alberta Solicitor General and Public Security he held the position of Associate Professor and Coordinator of the Criminal Justice program at Athabasca University. He has carried out empirical studies on the implementation of community based policing, police organizational/managerial change, police training, intelligence led policing and the shifting boundaries between private and public policing. Dr. Clarke has completed research for the Canadian Association of Chiefs of Police, the Federal Solicitor General, Health Canada, Edmonton Police Service, the Metropolitan Toronto Police Service, the Alberta Association of Chiefs of Police and the Law Commission of Canada. Dr. Clarke currently is acting President of the Canadian Association of Police Educators and is a board member of the Canadian Police Sector Council.

3.  Chief Superintendent Dale L. Sheehan is a member of the Royal Canadian Mounted Police. Born and raised in Montreal, he attended John Abbott College’s Police Technology Program. He is a graduate of Carleton University (B.A. Sociology/Criminology/Law) and as his duties have transferred him across Canada, has attended and taken courses at the University of Prince Edward Island, Acadia University, University of Ottawa and University of Regina. Chief Superintendent Sheehan joined the RCMP in 1986 and after graduating from Depot in Regina, was posted to Montague P.E.I. Following that he transferred to Kentville, Nova Scotia. His duties included highway patrol, general duties, general investigation section and drugs. During this time, he was seconded to the former Yugoslavia (Erdut, Ilok, Vukovar) with the United Nations Peacekeeping forces in 1993 as a member of the civilian police to monitor and report human rights violations, crimes against humanity and other war atrocities. Returning to Nova Scotia, he was transferred to the RCMP Training Academy (Depot) in Regina as a driving instructor and academic facilitator. He was promoted to Sergeant in Informatics and was commissioned as Support Services officer at Depot. He was then Officer in charge of the Canadian Law Enforcement Training Unit, responsible for the training and development of federal government partners such as Fisheries and Oceans and Parks Canada. Chief Superintendent Sheehan was transferred to Ottawa, Learning and Development and promoted to Superintendent. He was then promoted to Director General, Chief Superintendent of the RCMP Learning and Development Branch. His responsibilities included all RCMP National Training programs, Tactical and Technical Training, Canadian Law Enforcement Training and International Training. He is Past President Of the Canadian Association of Police Educators and sits on several national and international boards of director. He has recently published a book entitled “Behind the Badge, the History of the RCMP Training Academy.” In October 2007, Chief Superintendent Sheehan won an international competition and was appointed as the first Director of Police Training and Development at INTERPOL. He currently resides in Lyon France