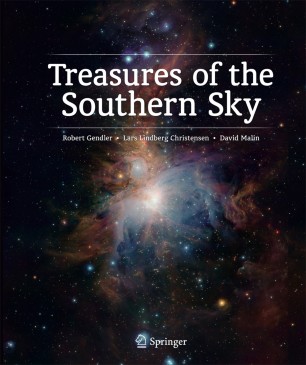 Treasures of the Southern Sky

In these pages, the reader can follow the engaging saga of astronomical exploration in the southern hemisphere, in a modern merger of aesthetics, science, and a story of human endeavor. This book is truly a celebration of southern skies.
Jerry Bonnell, Editor - Astronomy Picture of the Day

The southern sky became accessible to scientific scrutiny only a few centuries ago, after the first European explorers ventured south of the equator. Modern observing and imaging techniques have since revealed what seems like a new Universe, previously hidden below the horizon, a fresh astronomical bounty of beauty and knowledge uniquely different from the northern sky. The authors have crafted a book that brings this hidden Universe to all, regardless of location or latitude.

Treasures of the Southern Sky celebrates the remarkable beauty and richness of the southern sky in words and with world-class imagery. In part, a photographic anthology of deep sky wonders south of the celestial equator, this book also celebrates the human story of southern astronomy with an engaging and detailed history of key contributors to southern sky exploration. The accompanying text provides the reader with intriguing facts and useful information about the featured objects.

The volume is arranged by southern hemisphere season and brings to the printed page many of the most provocative and beautiful astronomical images of our time, many in print for the first time. The collection of imagery covers a full range of deep sky astronomical objects, including the familiar and iconic as well as those that are more obscure but no less intriguing. Masterful, state of the art professional and amateur astrophotography highlights the authors' carefully selected deep sky "treasures."

The beauty and richness of the southern night sky is legendary. From southern latitudes the finest globular clusters in the sky are visible to the unaided eye, as are the nearest galaxies, the Magellanic Clouds. The brightest part of the Milky Way passes overhead during the southern winter and the nearest bright star as well as the legendary asterism known as the Southern Cross are both observable throughout the year.

Despite these stunning highlights, the southern sky has received has received less attention than its northern counterparty, and fewer photographs exist of its lesser known, yet equally stunning and intriguing objects. This visual anthology features striking photographic portraits of the most celebrated to the more obscure southern astronomical objects. Carefully selected world-class images have been assembled using the latest digital methods, revealing these southern gems in ways never before seen.

To provide a context, the pictures capture the sky in variety of scales, from the wide vistas seen through hobby telescopes to the tiny fields relayed in exquisitely rich detail by the powerful optics of the largest professional telescopes, including the Hubbel Space Telescope and ESO's telescopes. The beauty of the night sky is on display in vivid color and dazzling detail. The presentation is further enhanced by a detailed history of southern sky exploration and lucid text that describes the southern night-sky wonders in ways that are engaging and non-technical.

Lars Lindberg Christensen is an award-winning science communication specialist who heads the European Southern Observatory education and Public Outreach Department, where he is responsible for public outreach and education for the VLT, La Silla, for ESO's part of ALMA, E-ELT and ESA's part of the Hubble Space Telescope. He obtained his Master's Degree in physics and astronomy from the University of Copenhagen, Denmark and has more than 100 publications to his credit, most of them in popular science communication and its theory.  He has written several books on popular science and science communication that have appeared in Finnish, Portuguese, Danish, German, Korean, Japanese and Chinese. Lars is Press Officer for the International Astronomical Union (IAU) and founder of the ESA/ESO/NASA Photoshop FITS Liberator project, manager of the IAU International Year of Astronomy 2009 Secretariat and the Executive producer and director of two astronomy documentaries.

David Malin has been involved in scientific imaging almost all of his working life. In the 1960's, he worked for a large international chemical company in the north of England, where he founded and ran a laboratory that used physical methods such as microscopy and X-ray diffraction techniques to solve problems in pure and applied chemistry. The enabling technology for may of those techniques at that time was photography. In 1975, he was recruited as photographic scientist for the newly commissioned Anglo-Australian Telescope (AAT) in Australia, and turned his attention to larger and more distant things. At the AAT he developed several new photographic that led to some significant astronomical discoveries. The same processes also allowed the creation of some of the first 3-color images of astronomical objects in 1978, and these photographs have been widely published and used by David Malin and others to explore and explain the astonishing beauty of the objects of the night sky. The additive 3-color process is now universally used by both amateur and professional astronomers alike. Only the detector has changed.

David is now retired but still actively involved with the AAO. He lives in Sydney with his wife Phillipa, where they enjoy their three children and numerous grandchildren.

“‘Treasures of the Southern Sky’ lets on get acquainted not just with the most impressive deep sky objects on could see there, but also with the history of observing the night sky in the southern hemisphere. … The main part of the book is composed of photographs of some of the most amazing objects that can be seen there … . this book is an excellent way to have the southern sky brought home to you.” (Kadri Tinn, AstroMadness.com, November, 2013)

“This book fully lives up to its name. Gendler … have collected more than one hundred photographs of objects in the southern sky--images lush in detail and possessing an engrossing beauty. … A true treasure of a book--one that can be enjoyed by anyone with an eye for beauty and curiosity about astronomy. Summing Up: Highly recommended. All levels/libraries.” (K. D. Fisher, Choice, Vol. 49 (11), August, 2012)

“The book is a pleasure to handle and to look at, and has obviously been produced by enthusiasts to share their own expert awareness, admiration, and appreciation of the treasures to be found in southern skies. … texts accompanying the illustrations are clear and helpful, and anyone interested in a well-chosen and spectacular array of New General Catalogue and Index Catalogue objects will not only enjoy it but also come away with a greater awareness of the amazing events taking place beyond the Solar System.” (Colin Cooke, The Observatory, Vol. 132 (1229), August, 2012)