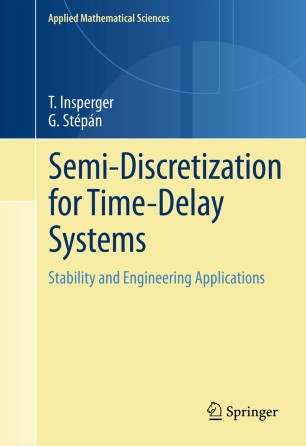 The book presents the recently introduced and already widely cited semi-discretization method for the stability analysis of delayed dynamical systems with parametric excitation. Delay-differential equations often come up in different fields of engineering, such as feedback control systems, machine tool vibrations, and balancing/stabilization with reflex delay. The behavior of such systems is often counter-intuitive and closed form analytical formulas can rarely be given even for the linear stability conditions. The same holds for parametrically excited systems. If parametric excitation is coupled with the delay effect, then the governing equation is a delay-differential equation with time-periodic coefficients, and the stability properties are even more intriguing. The semi-discretization method is a simple but efficient method that is based on the discretization with respect to the delayed term and the periodic coefficients only. This discretization results in a system of ordinary differential equations that can be solved using standard techniques, which are part of basic engineering curriculums. The method can effectively be used to construct stability charts in the space of system parameters. These charts provide a useful tool for engineers, since they present an overview on the effects of system parameters on the local dynamics of the system. The book presents the application of the method to different engineering problems, such as dynamics of turning and milling processes with constant and with varying spindle speeds, stick balancing with reflex delay, force control processes in the presence of feedback delay, and stabilization using time-periodic control gains.

The book is designed for graduate and PhD students as well as researchers working in the field of delayed dynamical systems with application to mechanical, electrical and chemical engineering, control theory, biomechanics, population dynamics, neuro-physiology, and climate research.