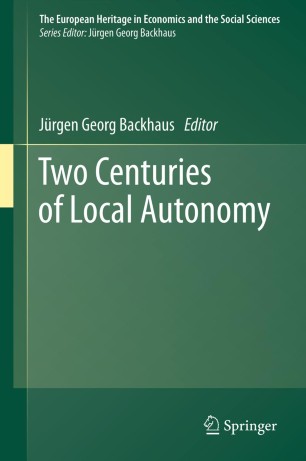 Part of the The European Heritage in Economics and the Social Sciences book series (EHES, volume 13)

One of the last Prussian Reforms during the Napoleonic Era was the constitution of local autonomy for the cities. Proof of its lasting importance is that it was the cities that carried out the deficit-based employment policies of the early 1930s also had to carry the burden of a democratic reconstitution of Germany in the postwar period. After the crushing defeat at Napoleon’s hands, likewise the reconstitution of Prussia fell to the cities. Today, the same constellation of problems can be found on different stages.  Europe, as it is growing together, faces a democracy deficit which ultimately will have to be addressed by the cities.  The countries in transition and undergoing transformation likewise will have to find arenas for democratic decision making, which likely will be at the municipal level. Finally, the United States of America also faces a quagmire at the federal level which ultimately will have to be resolved at the state or local level. Contributions to this book examine all of these issues, making it of interest to students in urban studies, public administration, history and political science as well as policy-makers concerned with local government and autonomy.