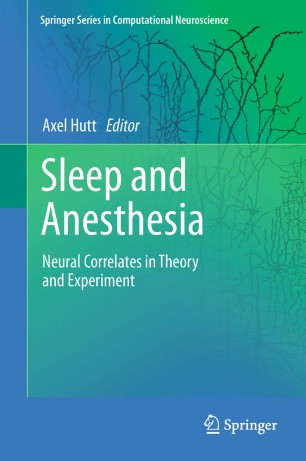 Neural Correlates in Theory and Experiment

Sleep and anesthesia seem so similar that the task of analyzing the neurological similarities and differences between the two is an obvious research postulate. Both involve the loss of consciousness, or the loss of awareness of external stimuli. Yet when we investigate further, key differences start to manifest themselves—anesthesia is drug-induced while sleep requires no external cause being only the most salient. Other fascinating questions crowd in too: do we dream while under anesthesia, and do we feel pain while sleeping? Examining neural activity associated with sleep and anesthesia can be effected at various levels, from the microscopic, single-neuron level right up to that of whole neural populations.

This book aims to reveal the underlying neural mechanisms of sleep and anesthesia by employing a range of experimental techniques and applying theoretical models of neural activity that predict the mechanisms related to both states. Of course, these models offer deeper insights if their assumptions and resulting data can be correlated to experimental findings, and it is these correlations that the book focuses on. As the outcome of workshops on anesthesia and sleep at the 2007 and 2009 Computational Neuroscience Conferences in Toronto and Berlin, the chapters lay out key theoretical issues as well as hot contemporary research topics. It also details experimental techniques on various spatial scales, such as fMRIand EEG-experiments on the macroscopic, and single-neuron and LFP measurements on the microscopic scale