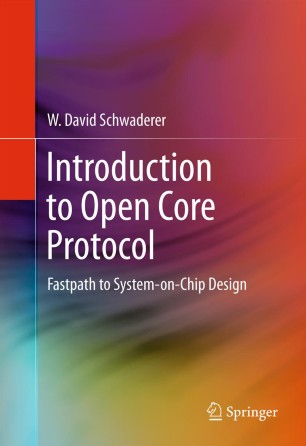 This book introduces Open Core Protocol (OCP), not as a conventional hardware communications protocol but as a meta-protocol: a means for describing and capturing the communications requirements of an IP core, and mapping them to a specific set of signals with known semantics.  Readers will learn the capabilities of OCP as a semiconductor hardware interface specification that allows different System-On-Chip (SoC) cores to communicate.  The OCP methodology presented enables intellectual property designers to design core interfaces in standard ways. This facilitates reusing OCP-compliant cores across multiple SoC designs which, in turn, drastically reduces design times, support costs, and overall cost for electronics/SoCs.

W. David Schwaderer has a masters degree in Applied Mathematics from the California Institute of Technology and an MBA from the University of Southern California.  He has worked at IBM, EDS, Adaptec, Symantec, and Silicon Valley startups.  He has authored six commercial software programs for a variety of machine architectures using several different languages, dozens of articles, and ten technical books that explain complex technology in approachable ways.

Whenever possible, David presents at Silicon Valley companies such as Intel, Google, Oracle Sun, and Symantec, as well as universities such as Stanford and MIT, immersing audiences in his favorite subject – innovation and its manifold surprises. His October 2007 MIT innovation lecture was selected as the best in the conference. He is a Silicon Valley consultant, presently assisting a global storage company to resolve storage device system development challenges.