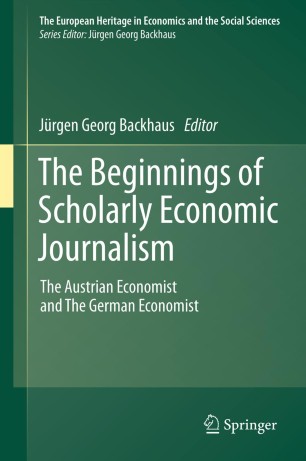 The Beginnings of Scholarly Economic Journalism

The twin journals, Der Österreichische Volkswirt (The Austrian Economist) and Der Deutsche Volkswirt (The German Economist) were created by Gustav Stolper, godfather of Joseph Schumpeter, first in Vienna and then after the First World War, in Berlin. Schumpeter was to become a frequent contributor of the Berlin-based journal, which combined a successful blend of economic analysis and political and business insider knowledge which Stolper gained with his famous and sought after parties at his Wannsee villa.  The two publications offer a kaleidoscope of many different ideas and concepts, some of which are addressed in this book, including philosophy, demography, monetary aspects, foreign developments, employment policy, and politics.  The personal and professional contributions of Gustav Stolper and his secretary, Lilo Linke, are also discussed.  Very little has been published on these early ventures into economic journalism, and this book will appeal to anyone studying economic journalism or the economic history of early twentieth century Europe.