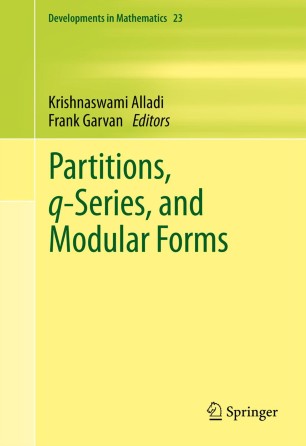 Part of the Developments in Mathematics book series (DEVM, volume 23)

This book contains a unique collection of both research and survey papers written by an international group of some of the world's experts on partitions, q-series, and modular forms, as outgrowths of a conference held at the University of Florida, Gainesville in March 2008. The success of this conference has led to annual year-long programs in Algebra, Number Theory, and Combinatorics (ANTC) at the university.

A common theme in the book is the study of q-series, an area which in recent years has witnessed dramatic advances having significant impact on a variety of fields within and outside of mathematics such as physics. Most major aspects of the modern theory of q-series and how they relate to number theory, combinatorics, and special functions are represented in this volume. Topics include the theory of partitions via computer algebra, elementary asymptotic methods; expositions on Ramanujan's mock theta-functions emphasizing the classical aspects as well as the recent exciting connections with the theory of harmonic Maass forms; congruences for modular forms; a study of theta-functions from elementary, function-theoretic and Riemann surface viewpoints; and a systematic analysis of multiple basic hypergeometric functions associated with root systems of Lie algebras.

The broad range of topics covered in this volume will be of interest to both researchers and graduate students who want to learn of recent developments in the theory of partitions, q-series and modular forms and their far reaching impact on diverse areas of mathematics.