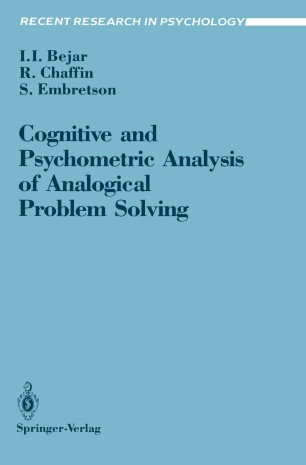 If one were to conduct an analysis of any profession the "ability to think analogically" is more than likely to be one of the requirements for success, be it an architectural studio, a research laboratory, a legal office, or a nuclear plant. Cognitive scientists are aware of the prominence of analogical reasoning in all forms of reasoning and learning, and have devoted substantial effort to ascer­ taining its nature. Test builders, like cognitive scientists, are aware of the cen­ trality of analogical reasoning and figure, correctly, that a test that samples a student's ability to think analogically may well be a good predictor of success in a variety of fields. This book is the result of a project to investigate analogical reasoning from both an individual differences and a cognitive perspective. The book is directed to both researchers and practitioners concerned with the nature and measurement of analogical reasoning. Cognitive scientists, linguists, psycholinguists, and natural language researchers will find the seman­ tic taxonomy and accompanying empirical results food for thought. Test devel­ opers will fmd it reassuring that performance on verbal analogy items is not just a reflection of the size of a person's vocabulary, and that tests can be designed according to principles, rather than assembled to satisfy a set of statistical speci­ fications. Psychometricians will find that content and response modelling can go together and that there are distinct benefits in approaching psychometric re­ sponse modelling from that integrative perspective.