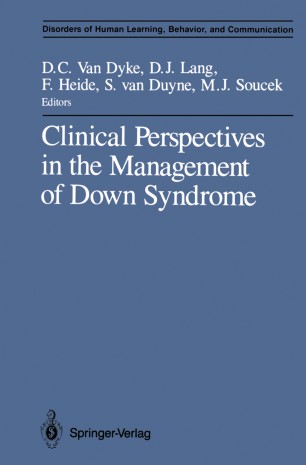 Clinical Perspectives in the Management of Down Syndrome

The management of and attitudes toward children and adults with Down syndrome have undergone considerable changes in the course of the condi­ tion's long history (Zellweger, 1977, 1981, Zellweger & Patil, 1987). J. E. D. Esquirol (1838) and E. Seguin (1846) were probably the first physicians to witness the condition without using currently accepted diagnostic designa­ tions. Seguin coined the terms furfuraceus or lowland cretinism in contradis­ tinction to the goiterous cretinism endemic at that time in the Swiss Alps. Esquirol, as well as Seguin, had a positive attitude toward persons who were mentally ill or mentally subnormal. Esquirol pioneered a more humane treatment in mental institutions and Seguin created the first homes in France, and later in the United States, aimed at educating persons who were mentally subnormal. The term mongolian idiocy was coined by J. H. L. Down in England (1866). The term is misleading in several respects: (1) Down identified the epicanthic folds seen in many children with Down syndrome with the additional skin fold in the upper lid occurring particularly in people of Oriental (Mongolian) descent; and (2) Down also erred by assuming that Down syndrome represented regression to an ethnic variant of lower cultural standing. Such an interpretation might have been understandable at a time when the myth of Anglo-Saxon superiority was widely accepted by the British. Charles Darwin's then highly acclaimed theory of origin of the species may have contributed to such a concept.