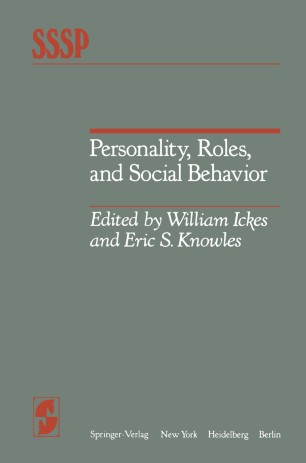 Personality and Roles: Sources of Regularities in Social Behavior For behavioral scientists, whether they identify primarily with the science of psychology or with that of sociology, there may be no challenge greater than that of discovering regularities and consistencies in social behavior. After all, it is such regularities and consistencies that lend predictability to the behavior of individuals in social contexts-in particular, to those events that constitute dyadic interactions and group processes. In the search for behavioral consistencies, two theoretical constructs have emerged as guiding principles: personality and roles. The theoretical construct of personality seeks to understand regularities and consistencies in social behavior in terms of relatively stable traits, enduring dispositions, and other propensities (for example, needs, motives, and attitudes) that are thought to reside within individuals. Because it focuses primarily on the features of individuals, the construct of personality is fundamentally psychological in nature. By contrast, the theoretical construct of roles seeks to understand regularities and consistencies in social behavior in terms of the directive influence of coherent sets of rules and prescriptions that are provided by the interpersonal, occupational, and societal categories of which individuals are continuing members. Because it focuses primarily on features of social structures, the construct of roles is fundamentally sociological in nature.