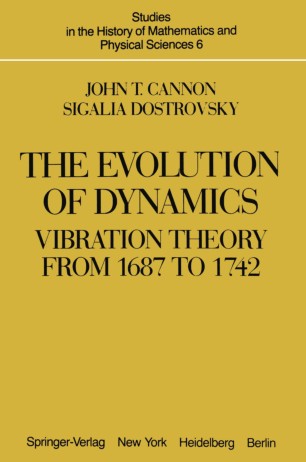 The Evolution of Dynamics: Vibration Theory from 1687 to 1742

Part of the Studies in the History of Mathematics and Physical Sciences book series (HISTORY, volume 6)

In this study we are concerned with Vibration Theory and the Problem of Dynamics during the half century that followed the publication of Newton's Principia. The relationship that existed between these subject!! is obscured in retrospection for it is now almost impossible not to view (linear) Vibration Theory as linearized Dynamics. But during the half century in question a theory of Dynamics did not exist; while Vibration Theory comprised a good deal of acoustical information, posed definite problems and obtained specific results. In fact, it was through problems posed by Vibration Theory that a general theory of Dynamics was motivated and discovered. Believing that the emergence of Dynamics is a critically important link in the history of mathematical science, we present this study with the primary goal of providing a guide to the relevant works in the aforemen­ tioned period. We try above all to make the contents of the works readily accessible and we try to make clear the historical connections among many of the pertinent ideas, especially those pertaining to Dynamics in many degrees of freedom. But along the way we discuss other ideas on emerging subjects such as Calculus, Linear Analysis, Differential Equations, Special Functions, and Elasticity Theory, with which Vibration Theory is deeply interwound. Many of these ideas are elementary but they appear in a surprising context: For example the eigenvalue problem does not arise in the context of special solutions to linear problems-it appears as a condition for isochronous vibrations.