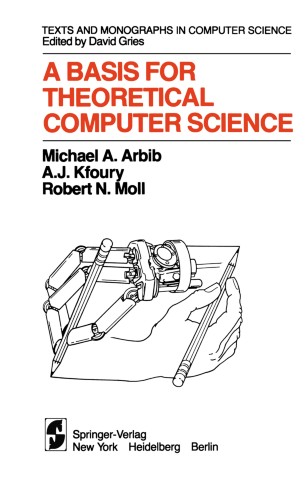 A Basis for Theoretical Computer Science

Computer science seeks to provide a scientific basis for the study of inform a­ tion processing, the solution of problems by algorithms, and the design and programming of computers. The last forty years have seen increasing sophistication in the science, in the microelectronics which has made machines of staggering complexity economically feasible, in the advances in programming methodology which allow immense programs to be designed with increasing speed and reduced error, and in the development of mathematical techniques to allow the rigorous specification of program, process, and machine. The present volume is one of a series, The AKM Series in Theoretical Computer Science, designed to make key mathe­ matical developments in computer science readily accessible to under­ graduate and beginning graduate students. Specifically, this volume takes readers with little or no mathematical background beyond high school algebra, and gives them a taste of a number of topics in theoretical computer science while laying the mathematical foundation for the later, more detailed, study of such topics as formal language theory, computability theory, programming language semantics, and the study of program verification and correctness. Chapter 1 introduces the basic concepts of set theory, with special emphasis on functions and relations, using a simple algorithm to provide motivation. Chapter 2 presents the notion of inductive proof and gives the reader a good grasp on one of the most important notions of computer science: the recursive definition of functions and data structures.