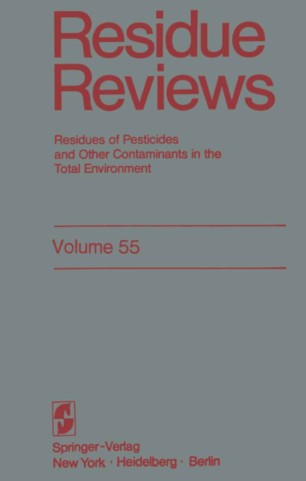 Residues of Pesticides and Other Contaminants in the Total Environment

That residues of pesticide and other contaminants in the total environ­ ment are of concern to everyone everywhere is attested by the reception accorded previous volumes of "Residue Reviews" and by the gratifying enthusiasm, sincerity, and efforts shown by all the individuals from whom manuscripts have been solicited. Despite much propaganda to the con­ trary, there can never be any serious question that pest-control chemicals and food-additive chemicals are essential to adequate food production, manufacture, marketing, and storage, yet without continuing surveillance and intelligent control some of those that persist in our foodstuffs could at times conceivably endanger the public health. Ensuring safety-in-use of these many chemicals is a dynamic challenge, for established ones are continually being displaced by newly developed ones more acceptable to food technologists, pharmacologists, toxicologists, and changing pest­ control requirements in progressive food-producing economies. These matters are of genuine concern to increasing numbers of gov­ ernmental agencies and legislative bodies around the world, for some of these chemicals have resulted in a few mishaps from improper use. Ade­ quate safety-in-use evaluations of any of these chemicals persisting into our foodstuffs are not simple matters, and they incorporate the considered judgments of many individuals highly trained in a variety of complex biological, chemical, food technological, medical, pharmacological, and toxicological disciplines.