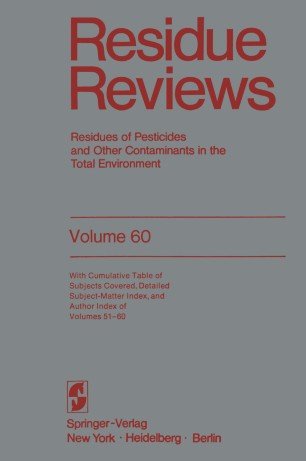 Residues of Pesticides and Other Contaminants in the Total Environment

"Sumithion" is the tradename owned by Sumitomo Chemical Co., Ltd., Japan, and given to O,O-dimethyl O-(3-methyl-4-nitrophenyl) phos­ phorothioate while its generic name registered at ISO and BSI is "feni­ trothion." It is an organophosphorous insecticide having a broad range of insecti­ cidal spectrum comparable to that of methyl parathion, and its toxicity to mammals and fish is low enough to make its handling of less concern. In 1959 the pesticide research group of Sumitomo Chemical Co., Ltd. was successful in synthesizing Sumithion, which had been code-numbered S-l102-A. Since then, the pesticide staffs of the company have been using their constant efforts in evaluation and practical development of the insecticide in various fields of application under different conditions of the world. Today, Sumithion is an insecticide most extensively used in Japan, being indispensable for field crops, industrial crops, and forestry protec­ tion besides public health purposes. In many other countries of the world, usage of Sumithion is now so extended that it has come to be known as a typical organophosphorus insecticide together with methyl parathion and malathion. Much of the information accumulated on Sumithion is here published by the members of Sumitomo engaged in the research and development of the compound.