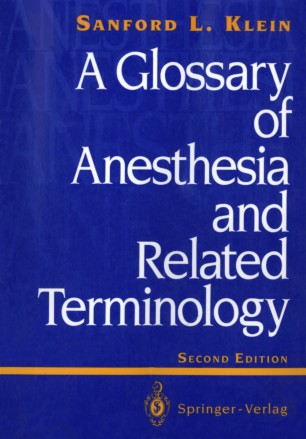 A Glossary of Anesthesia and Related Terminology

The second edition of this text catches the specialty of anesthesia at what will probably prove to be the apex of its influence and recognition amongst the specialties of medicine. The scientific basis of the specialty is becoming increasingly well delineated. Anesthesiologists have established themselves in local, regional, and national forums as spokespersons not only for the specialty, but also for medicine in general. And the specialty at last may be emerging from the stereotype of a faceless, inarticulate, shy and retiring figure, whose outstanding characteristic was the cloying odor of diethel ether! Technology has moved into the specialty on seven league boots. Just as an example, the basic design of the anesthesia machine was stable between the early 1950s and certainly the late 1970s. Suddenly, in the blink of an eye, our anesthesia machines are becoming intelligent, are utilizing heads-up displays, and are becoming more and more capable of writing the anesthesia record. Monitoring standards for anesthesia have burgeoned to the point that almost every aspect of the specialty is impinged upon by some rule and some "thou will or thou will not. " The importation and creation of terminology is exploding. In fact, one of the problems in updating this book was deciding when to stop. The author hopes that the goal of creating a snapshot in time through definitions of commonly used words and phrases has been achieved.