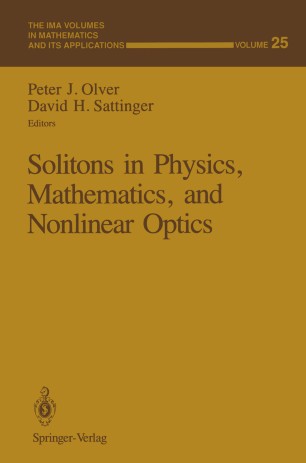 Part of the The IMA Volumes in Mathematics and Its Applications book series (IMA, volume 25)

This IMA Volume in Mathematics and its Applications SOLITONS IN PHYSICS, MATHEMATICS, AND NONLINEAR OPTICS is based on the proceedings of two workshops which were an integral part of the 1988-89 IMA program on NONLINEAR WAVES. The workshops focussed on the main parts of the theory of solitons and on the applications of solitons in physics, biology and engineering, with a special concentration on nonlinear optics. We thank the Coordinating Committee: James Glimm, Daniel Joseph, Barbara Keyfitz, An­ Majda, Alan Newell, Peter Olver, David Sattinger and David Schaeffer for drew planning and implementing the stimulating year-long program. We especially thank the Workshop Organizers for Solitons in Physics and Mathematics, Alan Newell, Peter Olver, and David Sattinger, and for Nonlinear Optics and Plasma Physics, David Kaup and Yuji Kodama for their efforts in bringing together many of the major figures in those research fields in which solitons in physics, mathematics, and nonlinear optics theories are used. A vner Friedman Willard Miller, Jr. PREFACE This volume includes some of the lectures given at two workshops, "Solitons in Physics and Mathematics" and "Solitons in Nonlinear Optics and Plasma Physics" held during the 1988-89 LM. A. year on Nonlinear Waves. Since their discovery by Kruskal and Zabusky in the early 1960's, solitons have had a profound impact on many fields, ranging from engineering and physics to algebraic geometry.