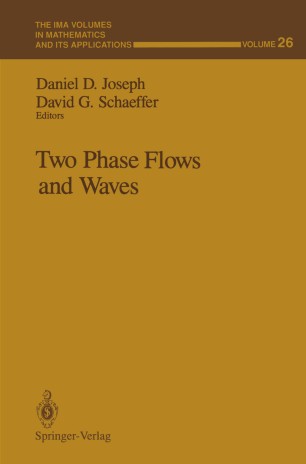 Part of the The IMA Volumes in Mathematics and Its Applications book series (IMA, volume 26)

This IMA Volume in Mathematics and its Applications TWO PHASE FLOWS AND WAVES is based on the proceedings of a workshop which was an integral part of the 1988-89 IMA program on NONLINEAR WAVES. The workshop focussed on the development of waves in flowing composites. We thank the Coordinating Commit­ tee: James Glimm, Daniel Joseph, Barbara Keyfitz, Andrew Majda, Alan Newell, Peter Olver, David Sattinger and David Schaeffer for planning and implementing the stimulating year-long program. We especially thank the Workshop Organizers, Daniel D. Joseph and David G. Schaeffer for their efforts in bringing together many of the major figures in those research fields in which modelling of granular flows and suspensions is used. Avner Friedman Willard Miller, Jr. PREFACE This Workshop, held from January 3-10,1989 at IMA, focused on the properties of materials which consist of many small solid particles or grains. Let us distinguish the terms granular material and suspension. In the former, the material consists exclusively of solid particles interacting through direct contact with one another, either sustained frictional contacts in the case of slow shearing or collisions in the case of rapid shearing. In suspensions, also called two phase flow, the grains interact with one another primarily through the influence of a viscous fluid which occupies the interstitial space and participates in the flow. (As shown by the lecture of I. Vardoulakis (not included in this volume), the distinction between these two idealized cases is not always clear.