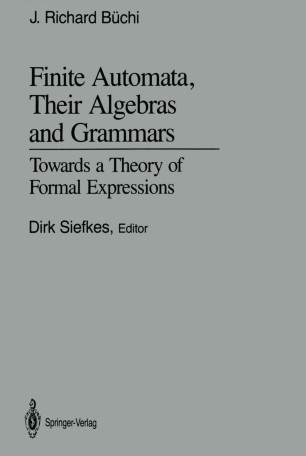 Finite Automata, Their Algebras and Grammars

Towards a Theory of Formal Expressions

The author, who died in 1984, is well-known both as a person and through his research in mathematical logic and theoretical computer science. In the first part of the book he presents the new classical theory of finite automata as unary algebras which he himself invented about 30 years ago. Many results, like his work on structure lattices or his characterization of regular sets by generalized regular rules, are unknown to a wider audience. In the second part of the book he extends the theory to general (non-unary, many-sorted) algebras, term rewriting systems, tree automata, and pushdown automata. Essentially Büchi worked independent of other rersearch, following a novel and stimulating approach. He aimed for a mathematical theory of terms, but could not finish the book. Many of the results are known by now, but to work further along this line presents a challenging research program on the borderline between universal algebra, term rewriting systems, and automata theory. For the whole book and again within each chapter the author starts at an elementary level, giving careful explanations and numerous examples and exercises, and then leads up to the research level. In this way he covers the basic theory as well as many nonstandard subjects. Thus the book serves as a textbook for both the beginner and the advances student, and also as a rich source for the expert.