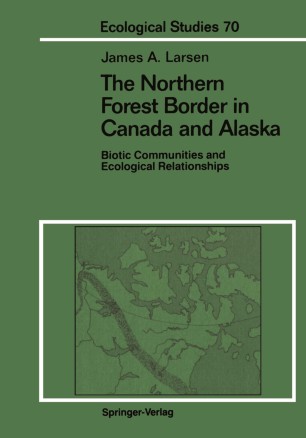 The Northern Forest Border in Canada and Alaska

It is enough to work on the assumption that all of the details matter in the end, in some unknown but vital way. Edward O. Wilson, Biophilia Advances in knowledge of northern ecology have been so rapid that to undertake a synthesis of all the literature now available would be a major enterprise, perhaps even a life's work, and so it must be considered permissible to fill in a few gaps, follow one's own inclinations, leaving comprehensive syntheses to those willing to undertake them. This is the rubric under which I have written, reporting some of the more interesting data I and others have obtained over the years, often diverging into discussions of plants, soils, climate, and faunal relationships which have perhaps not previously been dealt with extensively, or at least in quite the same way. This is purely intentional, since I find it difficult to summon up the needed enthusiasm, at this late hour, to write on topics which unfortunately for me have little attraction. I have thus written for the pleasure derived from depicting, perhaps at times as something of an impressionist, a fascinating biotic region, a captivating land, a collection of interesting ecological problems, environmental relationships to be discerned in part, perhaps understood to some small degree, perhaps one day to be modeled mathematically. As Leo Szilard once wrote: ': . . to be able to say even this much might be of some value" (Szilard, 1960).