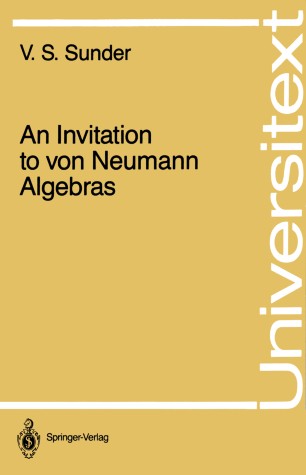 An Invitation to von Neumann Algebras

Why This Book: The theory of von Neumann algebras has been growing in leaps and bounds in the last 20 years. It has always had strong connections with ergodic theory and mathematical physics. It is now beginning to make contact with other areas such as differential geometry and K-Theory. There seems to be a strong case for putting together a book which (a) introduces a reader to some of the basic theory needed to appreciate the recent advances, without getting bogged down by too much technical detail; (b) makes minimal assumptions on the reader's background; and (c) is small enough in size to not test the stamina and patience of the reader. This book tries to meet these requirements. In any case, it is just what its title proclaims it to be -- an invitation to the exciting world of von Neumann algebras. It is hoped that after perusing this book, the reader might be tempted to fill in the numerous (and technically, capacious) gaps in this exposition, and to delve further into the depths of the theory. For the expert, it suffices to mention here that after some preliminaries, the book commences with the Murray - von Neumann classification of factors, proceeds through the basic modular theory to the III). classification of Connes, and concludes with a discussion of crossed-products, Krieger's ratio set, examples of factors, and Takesaki's duality theorem.