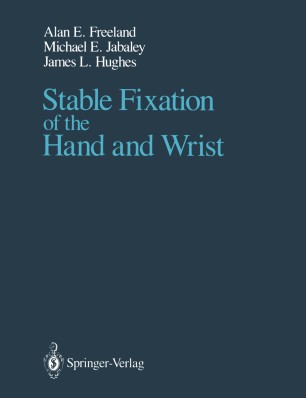 Stable Fixation of the Hand and Wrist

In the past, conservative (or nonoperative) treatment of fractures of the hand has been the rule and severe and multiple fractures usually did not receive surgical atten­ tion. There are probably several reasons why this is so. Rarely did these fractures threaten life; they usually healed rapidly; and after immobilization, hand pain usually subsided. At the same time, intraarticular fractures frequently were unstable and often displaced and attempts to correct deformity were considered difficult to achieve. As a result, the ultimate joint motion in many cases was limited. It can fairly be said that decisions and techniques regarding internal fixation of small joints and bones were not known to most surgeons. Although the history of internal fixation is not extensive, there have been some exciting events. In the 16th century gold plates were used to repair cleft palates. Later, the Chinese employed wire loop sutures to correct difficult fractures. In the 18th century silver cerclage wires were used to achieve fixation and promote early bone healing. Although these fracture treatments occasionally proved successful, more frequently they did not and they never enjoyed wide acceptance. Doctors Alan Free­ land, Michael Jabaley, and James Hughes have described this history of bone fixation in a manner that is both colorful and educational and they have managed to extract the essential features that lend continuity to the story of the development of internal fixation.