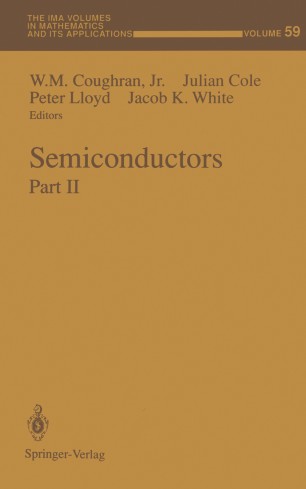 Part of the The IMA Volumes in Mathematics and its Applications book series (IMA, volume 59)

This IMA Volume in Mathematics and its Applications SEMICONDUCTORS, PART II is based on the proceedings of the IMA summer program "Semiconductors." Our goal was to foster interaction in this interdisciplinary field which involves electrical engineers, computer scientists, semiconductor physicists and mathematicians, from both university and industry. In particular, the program was meant to encourage the participation of numerical and mathematical analysts with backgrounds in ordinary and partial differential equations, to help get them involved in the mathematical as­ pects of semiconductor models and circuits. We are grateful to W.M. Coughran, Jr., Julian Cole, Peter Lloyd, and Jacob White for helping Farouk Odeh organize this activity and trust that the proceedings will provide a fitting memorial to Farouk. We also take this opportunity to thank those agencies whose financial support made the program possible: the Air Force Office of Scientific Research, the Army Research Office, the National Science Foundation, and the Office of Naval Research. A vner Friedman Willard Miller, J r. Preface to Part II Semiconductor and integrated-circuit modeling are an important part of the high­ technology "chip" industry, whose high-performance, low-cost microprocessors and high-density memory designs form the basis for supercomputers, engineering work­ stations, laptop computers, and other modern information appliances. There are a variety of differential equation problems that must be solved to facilitate such mod­ eling.