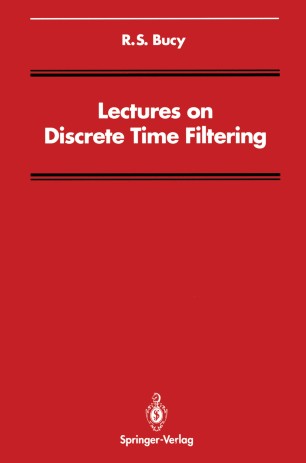 The theory of linear discrete time filtering started with a paper by Kol­ mogorov in 1941. He addressed the problem for stationary random se­ quences and introduced the idea of the innovations process, which is a useful tool for the more general problems considered here. The reader may object and note that Gauss discovered least squares much earlier; however, I want to distinguish between the problem of parameter estimation, the Gauss problem, and that of Kolmogorov estimation of a process. This sep­ aration is of more than academic interest as the least squares problem leads to the normal equations, which are numerically ill conditioned, while the process estimation problem in the linear case with appropriate assumptions leads to uniformly asymptotically stable equations for the estimator and the gain. The conditions relate to controlability and observability and will be detailed in this volume. In the present volume, we present a series of lectures on linear and nonlinear sequential filtering theory. The theory is due to Kalman for the linear colored observation noise problem; in the case of white observation noise it is the analog of the continuous-time Kalman-Bucy theory. The discrete time filtering theory requires only modest mathematical tools in counterpoint to the continuous time theory and is aimed at a senior-level undergraduate course. The present book, organized by lectures, is actually based on a course that meets once a week for three hours, with each meeting constituting a lecture.