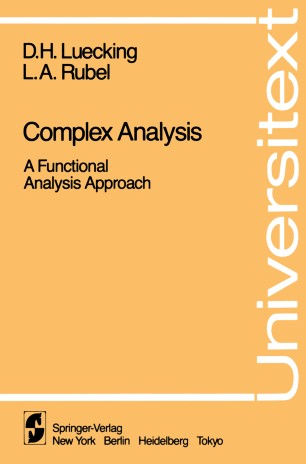 The main idea of this book is to present a good portion of the standard material on functions of a complex variable, as well as some new material, from the point of view of functional analysis. The main object of study is the algebra H(G) of all holomorphic functions on the open set G, with the topology on H(G) of uniform convergence on compact subsets of G. From this point of vie~, the main theorem of the theory is Theorem 9.5, which concretely identifies the dual of H(G) with the space of germs of holomorphic functions on the complement of G. From this result, for example, Runge's approximation theorem and the global Cauchy integral theorem follow in a few short steps. Other consequences of this duality theorem are the Germay interpolation theorem and the Mittag-Leffler Theorem. The approach via duality is entirely consistent with Cauchy's approach to complex variables, since curvilinear integrals are typical examples of linear functionals. The prerequisite for the book is a one-semester course in com­ plex variables at the undergraduate-graduate level, so that the elements of the local theory are supposed known. In particular, the Cauchy Theorem for the square and the circle are assumed, but not the global Cauchy Theorem in any of its forms. The second author has three times taught a graduate course based on this material at the University of Illinois, with good results.