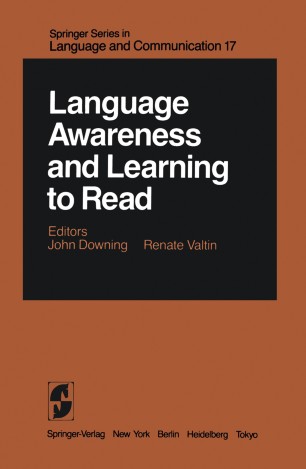 Language Awareness and Learning to Read

Part of the Springer Series in Language and Communication book series (SSLAN, volume 17)

During the 1970s there was a rapid increase in interest in metacognition and metalinguistics. The impetus came from linguistics, psychology, and psycho­ linguistics. But with rather unusual rapidity the work from these scientific dis­ ciplines was taken over in education. This new direction in these various areas of academic study was taken simultaneously by several different investigators. Although they had varying emphases, their work sometimes appears to be over­ lapping; despite this, it has been rather difficult to find a consensus. This is reflected in the varying terminology used by these independent investigators­ "linguistic awareness," "metacognition," "metalinguistic ability," "task aware­ ness," "lexical awareness," and so on. For educators these developments presented a glittering array of new ideas that promised to throw light on children's thinking processes in learning how to read. Many reading researchers and graduate students have perceived this as a new frontier for the development of theory and research. However, the variety of independent theoretical approaches and their accompanying terminologies has been somewhat confusing.