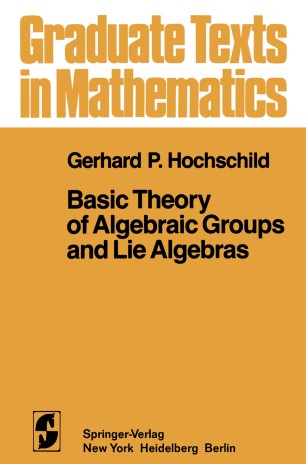 The theory of algebraic groups results from the interaction of various basic techniques from field theory, multilinear algebra, commutative ring theory, algebraic geometry and general algebraic representation theory of groups and Lie algebras. It is thus an ideally suitable framework for exhibiting basic algebra in action. To do that is the principal concern of this text. Accordingly, its emphasis is on developing the major general mathematical tools used for gaining control over algebraic groups, rather than on securing the final definitive results, such as the classification of the simple groups and their irreducible representations. In the same spirit, this exposition has been made entirely self-contained; no detailed knowledge beyond the usual standard material of the first one or two years of graduate study in algebra is pre­ supposed. The chapter headings should be sufficient indication of the content and organisation of this book. Each chapter begins with a brief announcement of its results and ends with a few notes ranging from supplementary results, amplifications of proofs, examples and counter-examples through exercises to references. The references are intended to be merely suggestions for supplementary reading or indications of original sources, especially in cases where these might not be the expected ones. Algebraic group theory has reached a state of maturity and perfection where it may no longer be necessary to re-iterate an account of its genesis. Of the material to be presented here, including much of the basic support, the major portion is due to Claude Chevalley.