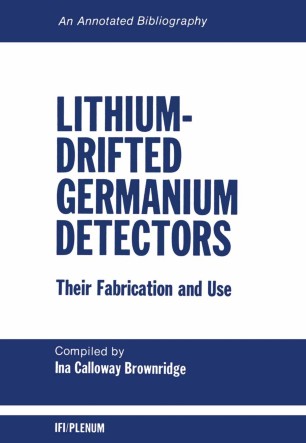 Lithium-Drifted Germanium Detectors: Their Fabrication and Use

A lithium-drifted germanium detector is a semiconductor de­ vice which operates at liquid nitrogen temperature, and is used for detection of nuclear radiation, mostly gamma ray. The detection occurs when the y-ray undergoes an interaction in the intrinsic or I region of the semiconductor. The interaction results in the pro­ duction of charge carriers which are swept out by an electric field. This is accomplished by reverse biasing the detector with approxi­ mately 100 v/mm of intrinsic material. The total amount of charge swept out is proportional to the energy dissipated in the intrinsic region. This may include the total energy of the photon, but gen­ erally somewhat less. The Ge(Li) device is a semiconductor p-n device with a very large intrinsic region between the positive carrier region and the negative carrier region (P-I-N). The fabrication of this device consists of three major steps: the diffusion of the lithium into the p-type germanium to give an n-type surface region, the drifting process to obtain the intrinsic region as deeply as possible, and the surface preparation. There are numerous procedures for the various steps as well as criteria for material selection and the preparation of the materials.