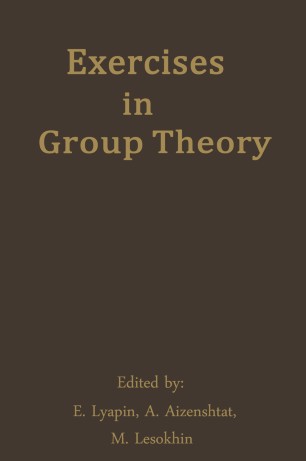 The present book is a translation of E. S. Lyapin, A. Va. Aizenshtat, and M. M. Lesokhin's Uprazhneniya po teorii grupp. I have departed somewhat from the original text in the following respects. I) I have used Roman letters to indicate sets and their elements, and Greek letters to indicate mappings of sets. The Russian text frequently adopts the opposite usage. 2) I have changed some of the terminology slightly in order to conform with present English usage (e.g., "inverses" instead of "regular conjugates"). 3) I have corrected a number of misprints which appeared in the original in addition to those corrections supplied by Professor Lesokhin. 4) The bibliography has been adapted for readers of English. 5) An index of all defined terms has been compiled (by Anita Zitarelli). 6) I have included a multiplication table for the symmetric group on four elements, which is a frequent source of examples andcounterex::Imples both in this book and in all of group theory. I would like to take this opportunity to thank the authors for their permission to publish this translation. Special thanks are extended to Professor Lesokhin for his errata list and for writing the Foreword to the English Edition. I am particularly indebted to Leo F. Boron, who read the entire manuscript and offered many valuable comments. Finally, to my unerring typists Sandra Rossman and Anita Zitarelli, I am sincerely grateful.