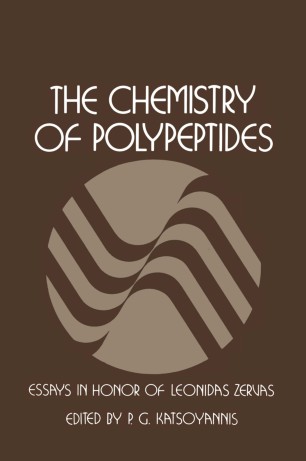 The Chemistry of Polypeptides

Leonidas Zervas, Emeritus Professor of organic chemistry at the University of Athens, and past president of the National Academy of Greece, cele­ brated his seventieth birthday this past year. For almost fifty years Zervas devoted his scientific skills and perception to the advancement of chemistry, particularly in the field of peptides and proteins. Indeed, his efforts, along with those of his teacher, co-worker, and friend, Max Bergmann, laid the foundations for a new era in the chemistry of peptides and proteins. Many of his colleagues and former students felt that it would be most at this time to honor him with a commemorative volume. They appropriate have contributed to this volume chapters describing some of their work and reviewing the advancements in particular areas of polypeptide chemistry. They dedicate this volume to Leonidas Zervas as an expression of their esteem and appreciation for the role he has played for the past half-century in the field of peptides and proteins.