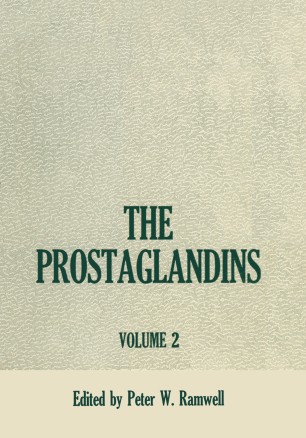 There is much evidence to suggest that prostaglandins may have a physiological role to play in the control of thyroid gland metabolism, although the precise nature of this role remains to be defined. Prostaglandins have been found in normal thyroid tissue, and there is evidence of increased levels in some, but not all, cases of medullary carcinoma of the thyroid. which may account for the associated diarrhea. Exogenous prostaglandins, like TSH, bind to thyroid plasma mem­ branes, stimulate the adenylate cyclase-cyclic AMP system, thyroid hormone secretion, iodide organification, colloid droplet formation, glucose oxidation, and 32p incorporation into phospholipids. Prosta­ glandins of the E series are the most potent, although their maximal effects are generally less than the maximal effects of TSH. The interrelationships existing between TSH and prostaglandins have been the subject of intensive investigation, but as yet no one uni­ fying concept has emerged. TSH and prostaglandins have been shown to occupy different receptors on the thyroid plasma membrane. Al­ though TSH can increase intracellular prostaglandin levels, probably as a result of increased synthesis, prostaglandins do not appear to be essential intermediates in TSH action on adenylate cyclase. The pos­ sibility that prostaglandins are part of a negative feedback system con­ trolling TSH action is, as yet, a tentative hypothesis, and further work will be required to unravel the interrelationships between these sub­ stances that now appear to be far more complex than has been envisaged thus far.