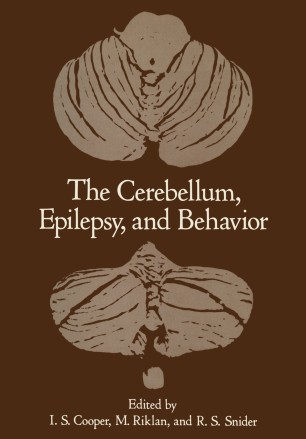 The Cerebellum, Epilepsy, and Behavior

In cats anesthetized lightly with pentobarbital or alpha-chloralose, electrical stimulation of the paramedian lobule of cerebellum resulted in a change of EEG pattern. Prior to stimulation the pattern consisted of h igh-ampl itude slow waves with superimposed low-ampl itude fast activity. In addition, the EEGs of animals anesthetized with chloralose showed "chloralose spikes". Immediately following brief cerebellar stimulation the slow wave activity and spikes disappeared, leaving only low-voltage fast activity. The effect was most pronounced in the contralateral leads from the rostral portions of the cerebrum. Study of the parameters most effective in evoking this effect revealed that stimulation frequency, train duration, and probably pulse duration affected the duration of suppression in a sigmoid fashion, with inflection points at approximately 90 Hz, 2.5 sec, and 1 msec, respectively. Above threshold values, stimulation cur­ rent showed an approximately linear relationship to duration of EEG sup­ pression. The after-discharge resulting from focal electrical stimulation of the cerebral cortex could be shortened by electrical stimulation of the para­ median lobule. The effect was essentially the same when cerebellar stim­ ulation preceded, occurred during, or followed the cerebral cortical stim­ ulation. The great variability of the after-discharge resulting from cerebral cortical stimulation as well as the variability of the effects of cerebellar stimulation made it impractical to study systematically the parameters op­ timal for shorten ing after-discharge. Such a study wi II require use of an awake, preferably partially restrained animal with electrodes chronically implanted.