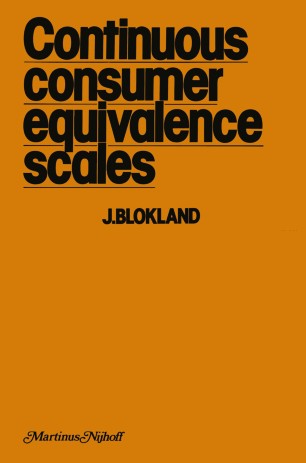 Costs of children as consumers is an issue as interesting and intriguing as it is intricate and tricky. It is interesting particularly because costs of children are often obscured, hence underestimated ('cheaper by the dozen'); more enlightened considerations may have an impact on family planning and population policy at a micro and macro level of living, respectively. From a methodological point of view, the topic is intriguing since consumption by individual members of a family cannot be measured directly, but can only be inferred to in an indirect way. Consequently, attempts at solving the children's cost problem were as frequent and diversified as they have been unsatisfactory or unsuccessful. One (older) approach to establishing costs of consumption by children compared with (male) adults was based on physiological considerations, viz. with respect to calorie requirements, and of a normative rather than an empirical nature: an international (League of Nations) consumer equivalence scale as well as our national (Amsterdam) scale were the results of these efforts. Unfortunately, this physiological myopia grossly underrates (young) children's consumption: the calories they use up may be small in number, but they are high in price. Moreover, not only their bodies, but also their gradually developing minds need (reading and other) matter, involving costs. A fortiori, this applies to women, who - as the biologically stronger sex - have been deemed to need less calories than men, disregarding their mental and other needs (after all, it is all a matter of mind over matter).