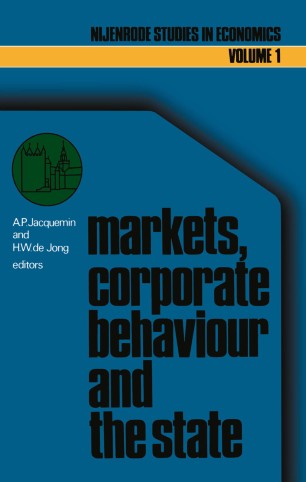 Markets, corporate behaviour and the state

This book originated at a meeting of American and European specialists in in­ dustrial organization, at the Instituut voor Bedrijfskunde, Nijenrode (The Netherlands) in August, 1974. The conference endeavored to bring together re­ searchers in a field where, paradoxically, the underlying phenomena studied are increasingly coordinated and internationalized, yet the observers remain pre­ dominantly isolated. Only rarely do they resort to comparisons between coun­ tries, and still less frequently to an analysis from a transnational outlook. As the contributions to this collection demonstrate, it has become clearer and clearer that -whether or not as a result of a random process, or of technological conditions, or of deliberate enterprise strategy - the determinants of market structures and their changes as time passes, have created fundamentally similar effects in different countries, resulting in industrial structures of the same kind. Thus, the largest firms and plants are found in the same sectors, and the most concentrated industries are more or less the same from one country to the other. The studies of Prais, Reid, Jacquemin & Phlips and Linda likewise show that a broad trend toward concentration has been manifest.