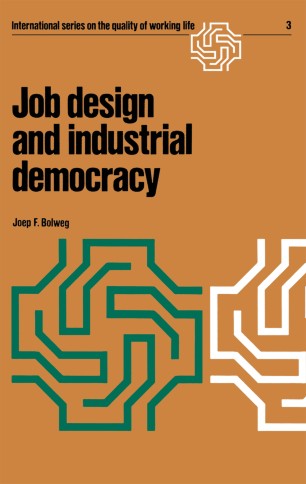 The case of Norway

Part of the International series on the quality of working life book series (IQWL, volume 3)

The organization of work is under critique in many industrialized countries. Bureaucracy, specialization, repetitive technology, and hierarchical control structures are criticized by politicians, trade unionists, and social scientists. They argue for improved quality of work, for work democratization, and for the humanization of work. This book evaluates Norwegian field ex­ periments in the area of job redesign which started already in 1964. Norway has therefore a lead in experience compared to most other countries, particu­ to the United States, where debates and subsequent experiments re­ larly volving around the quality of working life and the democratization of work started only in the early seventies. The Norwegian social scientists who left their academic bastions and started action research drew heavily upon the 'open socio-technical system' thinking as developed by the Tavistock Insti­ tute of Human Relations in London. This descriptive evaluation study ana­ lyzes the job redesign experiments from an industrial democracy perspective and places the experiments in their national political and labor relations contexts. Special emphasis is given to the actual and potential role trade unions can play in shopfloor job design projects. The industrial relations of the United States is generally used as reference point in this study. system The theory guiding the experiments regards work democratization through job redesign as a first step in a bottom-up process of organizational demo­ cratization.