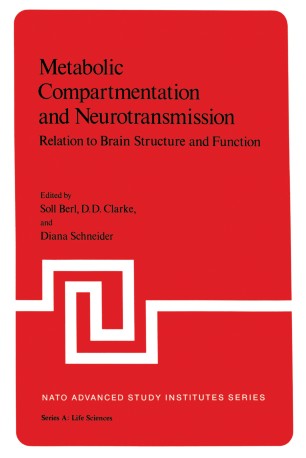 Relation to Brain Structure and Function

The first symposium on metabolic compartmentation in brain was held at the Rockefeller Foundation, Bellagio, Italy, July 11-16, 1971; the proceedings CR. Balazs and J. E. Cremer, editors, MacMillan) appeared in 1973. At the conclusion of the first symposium it was decided to assess in 2-3 years the progress in this rapidly developing area. This volume represents the proceedings of an Advanced Study Institute, made possible by a grant from the North Atlantic Treaty Organization, Scientific Affairs Division. Additional generous support by the Wellcome Trust allowed attendance by participants from non-NATO countries. S. Ber! D. D. Clarke D. Schneider xi Introduction The term metabolic compartmentation, as related to the chemistry of the brain, appeared in print for the first time about 15 years ago. The concept was developed in the laboratory of Dr. Heinrich Waelsch as a result of studies related to the metabolism of glutamic acid and glutamine. It was welcomed by a number of neurochemists who felt that the concept had validity and would help explain metabolic phenomena that were otherwise quite puzzling. The concept gradually achieved general acceptance, and by 1971 the amount of information that could profit by being examined from the point of view of metabolic compartmentation had increased sufficiently to warrant a symposium on the subject ("Metabolic Compartmentation in the Brain," Balazs and Cremer, eds. , MacMillan, 1973). Almost all the participants at that initial symposium were present at the second, on which this volume is based.