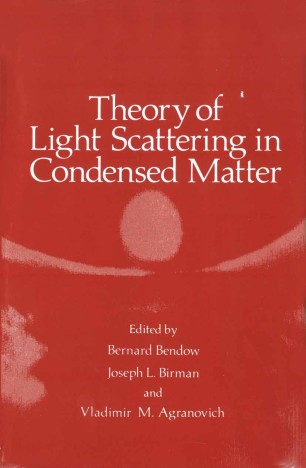 The First Binational USA-USSR Seminar-Symposium on the Theory of Light Scattering in Condensed Matter was held in Moscow 26-30 May 1975. The initial conception for a light scattering seminar of about fifty scientists - half from each side, including theorists and experimenters "well versed in theory" - arose from discussions between Professor J. L. Birman and Professor K. K. Rebane at the 1971 Paris International Conference on Light Scattering in Solids. This conception won approval among the active scientists on both sides. After considerable planning and some delays, it received both material support and encouragement from the appro­ priate organizations on each side: in the USA: The National Science Foundation (Division of International Programs), and the National Academy of Sciences; in the USSR: the Academy of Sciences USSR. A variety of reasons contributed to the positive response on both sides: for example, the considerable and high level of theoretical and experimental scientific activity on both sides in laser-related light scattering, optics, and generally - electro­ dynamics of condensed media - some along rather similiar lines; the impediments to free and easy communication and travel be­ tween USA and USSR scientists working on related problems; plus the desire to improve both contacts, and the free flow of informa­ tion and individuals, to the mutual advantage of both sides.