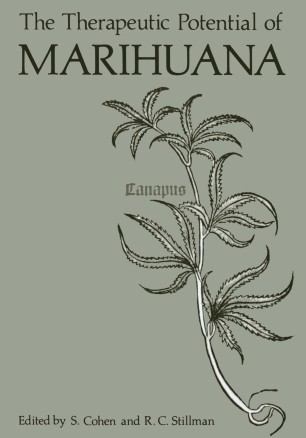 Scientific information about cannabis and its components has grown exponentially during the past decade. Certain of the findings have led to exploratory studies into the therapeutic utility of the drug. At the present time, a number of areas of usefulness have been investigated, with some showing greater promise than others. At what point should these data be collected and presented? Should it be early, after some initial impressions have been obtained? Or should it come later, following confirmatory studies by others? Both stages of development are represented in this volume. In a number of instances, the papers consist of hitherto unpublished material. It seemed worthwhile to bring together the investigators working in a wide variety of disciplines who had in common their research activities in the therapeutic aspects of the cannabinoids and related synthetic compounds. This was done at the Asilomar Conference Center in Pacific Grove, California during November, 1975. The papers presented and the ensuing discussion constitute the contents of this volume. It is the Editors' hope that the book will stimulate further involvement in the therapeutic studies. It should not be expected, nor is it anticipated that some cannabinoid will be available commercially in the near future. The nature of the approval process is such that years elapse between initial testing, however promising, and final approval for marketing. This is particularly true for a completely new chemical entity, and even more so for one with a checkered reputation.