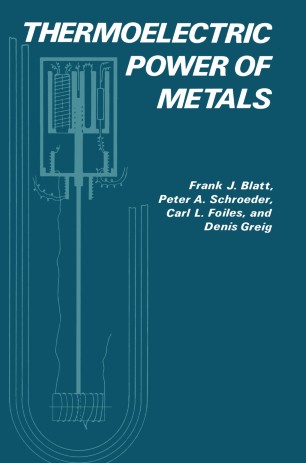 Thermoelectric and related transport properties of metals have been a source of information and, also, exasperation to physicists for over a century. Perhaps the principal reasons for interest in these phenomena are their sensitivity to composition, structure and external fields and, until fairly recently, the distressing fact that often even gross experimental features such as the sign of the thermopower eluded theoretical understanding. During the past two decades many of the previously perplexing aspects of thermoelectricity have yielded to more sophisticated theoretical treat­ ment. As a result of this effort and concomitant experimental work using advanced measurement techniques, there is now good reason to believe that thermoelectric phenomena can shed much light on the interactions between electrons and phonons, impurities, and other defects. The last few years have witnessed new and fascinating developments that promise to stimulate new activity in this field. In contrast to the more conventional transport properties, second-and high-order contributions in electron scattering theory appear to play a profound role in thermoelectricity-the controversy surrounding ordinary and "phony" phonon drag is far from resolved; the startlingly large effect of magnetic fields on the thermopower of metals appears to be linked intimately to scattering anisotropy; quantum oscillations of thermopower are orders of magnitude larger than corresponding oscillations of the magnetoresistance; a new approach to thermoelectric studies allows extension of thermopower measurements into the millikelvin region of temperature; finally, the advent of superconducting detection devices permits the precise measurement of extremely small voltages, an essential requirement in this field.