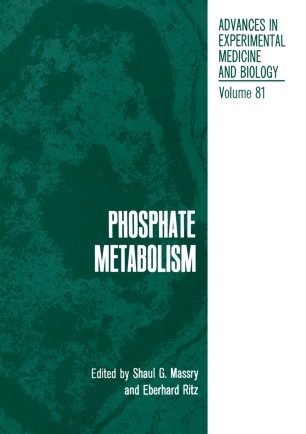 Part of the Advances in Experimental Medicine and Biology book series (AEMB, volume 81)

We present to our readers the proceedings of the Second International Workshop on Phosphate. A short account of the history of the effort led to the Phosphate Workshops is appro­ priate and can be of interest to the reader. The idea for Phosphate Workshops was born in the early days of November, 1974. One of us (S. G. M. ) suggested the thought to a group of scientists gathered for a luncheon in one of the attrac­ tive small restaurants in Weisbaden, Germany. The purpose of the workshop was to bring together interested scientists to discuss the newer developments and the recent advances in the field of phosphate metabolism and the other related minerals. An Organizing Committee made of Shaul G. Massry (USA), Louis V. Avioli (USA), Philippe Bordier (France), Herbert Fleisch (Switzerland), and Eduardo Slatopolsky (USA) was formed. The First Workshop was held in Paris during June 5-6, 1975 and was hosted by Dr. Philippe Bordier. Its proceeding was already published. The Second Workshop took place in Heidelberg during June 28-30, 1976 and was hosted by Dr. Eberhard Ritz. Both of these workshops were extremely successful scientific endeavors, and the need for them was demonstrated by the great interest they generated among the scientific community. The Or­ ganizing Committee, therefore, decided to continue with the tradi­ tion to hold additional Workshops annually or every other year.