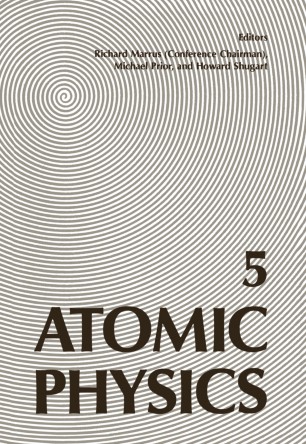 The Fifth International Conference on Atomic Physics was held July 26-30, 1976 in Berkeley, California. Invited talks were solicited which were representative of the most important developments since the fourth conference held in Heidelberg, Germany in 1974. In this volume, we have collected the manuscripts of the invited speakers, in the belief that they represent a guide to contemporary re­ search in atomic physics. Experimental work on such topics as the search for parity violation, spectroscopy and collision processes of fast, highly-stripped heavy ions, exotic atoms, high-Rydberg states, laser spectros­ copy, photoelectron spectroscopy, and others are described. The work described in these manuscripts is a clear mea­ sure of the continued vitality of our field. One unhappy event since the last conference was the passing of Dr. Victor William (Bill) Cohen (1911-1974) of Brookhaven National Laboratory. Bill was one of the scientists who recognized early the need for personal communication among atomic physicists and was the prime mover in establishing the present international conference series. Everyone who has enjoyed the stimulation of these conferences is indebted to Bill Cohen, and we dedicate this volume of the proceedings to his memory.