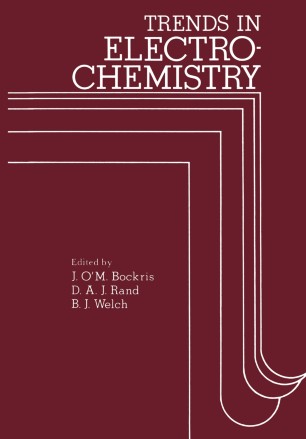 This volume presents plenary lectures and invited papers that Were delivered during the Fourth Australian Conference on Electro­ chemistry held at The Flinders University of South Australia, 16-20th February 1976. EZeat~oahemi8try fo~ a Futu~e Soaiety was selected as the Conference theme since the organising committee were mindful of the rapid change in technological perspective which the world now faces. We no longer have a prospect of uncontrolled spontaneous expansion and change as the result of technological enterprise. Rather, we face the task of attempting to reach a state of very restricted growth. In the next few decades special accent must be placed on minimizing pollution and maximizing the efficient utilization of all available energy sources. With this in mind, the Conference organisers considered that a conventional electrochemistry symposium, with its divisions into the various academic aspects, would be less relevant than a meeting devoted to aspects of electrochemistry which may underlie parts of the new and necessary technology for the future state of affairs. What has actually been achieved by the Conference organisers is a balance between the ideals expressed and the resulting response from electrochemists. This response has a bias which reflects the dominance of certain resources, e.g. metallic minerals, within Australia. Consequently, the papers included in T~ends in EZeat~o­ ahemist~ cover subjects which are of both global and local concern.