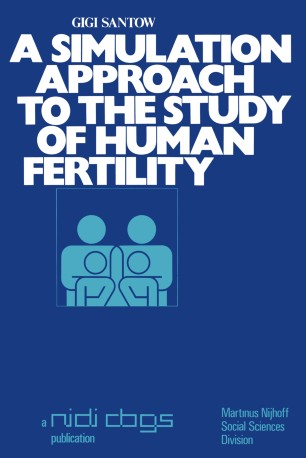 A simulation approach to the study of human fertility

Part of the Publications of the Netherlands Interuniversity Demographic Institute (N.I.D.I.) and the Population and Family Study Centre (C.B.G.S.) book series (NIDI, volume 5)

This book is an amended and somewhat shorter version of my doctoral thesis which I submitted to the Australian National University in 1976, and subsequently edited at the Netherlands Interuniversity Demographic Institute in 1977. The work falls naturally into two parts. The first is concerned with the construction and validation of a model, and the second with its application as an experimental tool. In the first part, comprising Chapters One to Four, an examination of historical and contemporary models of population growth led to the decision to study changes in fertility by means of a biological micro simulation model. The reasons supporting the choice of such a model were discussed, and a search of the literature produced the data to be used as model input. The effects of varying the input were examined and then the model output was tested against Hutterite data. The main emphasis of the second part of the work, comprising Chapters Five to Seven, was the testing of the effect on the fertility of one society of variations in the duration of the post partum period of non-susceptibility to conception, and in the level of infant and child mortality. Further simulations were performed to discover the impact on fertility of the use of contraception to attain different family sizes, both with and without the additional effect of infant and child mortality.