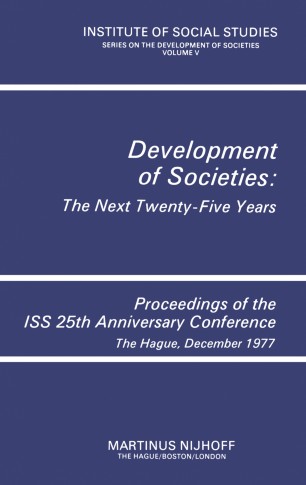 Development of Societies: The Next Twenty-Five Years

Proceedings of the ISS 25th Anniversary Conference The Hague, December 1977

This volume is the product of a conference on the theme 'Development - the Next Twenty-five Years' which the Institute of Social Studies held in Decem­ ber 1977 to mark its own twenty-fifth anniversaryas a centre of development studies. We felt it appropriate at that point in time to caU together specialists from all over the world in an attempt to assess the 'state of play' in our field as we move into the last quarter of the twentieth century. 1 For several days, therefore, the Institute's new building house d a remarkable concentration of knowledge and experience concerning the problems of the so-calle d less­ developed countries, drawn from all over the world. Although it was inevitable that the participants should represent the past (and it was several times re­ marked that, in that sense, there were too few women present), the earnest and sometimes heated discussions looked to the future as much as to what had happened in the last twenty-five years. As the discussions proceeded, three things became apparent. Firstly , although the papers submitted did not fully reveal it, the ongoing debate between radicals and moderates, those who saw possibilities of change only basically through a direct break with existing structures and those who felt change possibIe within them, is by no means at an end.