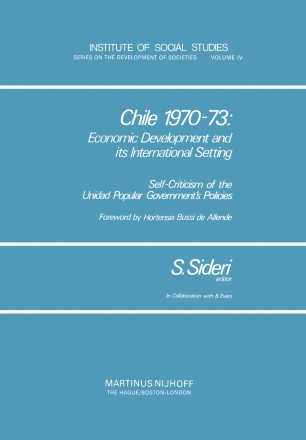 One of the main objectives of the Unidad Popular ('Popular Unity') Govern­ ment was to attain Chile's evolution towards more advanced forms of social organization within the framework of strictly respected democracy. This objective, which is deeply inherent in every human being and conse­ quently present under alI conditions and in alI parts of the world, is not weakened by temporary defeats or transient retreats. History proves this, and current events in many parts ofthe world fully confirm it. One of the areas in which this struggle for progress takes place most in­ tensively is economics. Here, c1ashes take place between the forces which work towards social progress, and those which oppose it and aim to maintain a sys­ tem of intolerable priveleges. The ideological and material resources available to the forces which attempt to re strain social progress are not small, and under given circumstances they overcome the forces by which the majority tries to realize a better future. This is expressed very c1early in the relationships which link the internal dynamics of social development with the great economic and political forces operating at the internationallevel. Consequently, analysis of the social trans­ formation process in such countries as Chile, in the context of the political and economic reactions these processes unleach at the internationallevel, is of key importance.