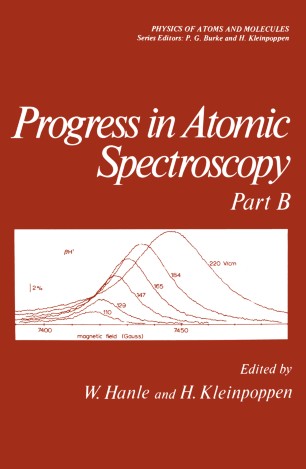 W. HANLE and H. KLEINPOPPEN In 1919, in the first edition of Atombau and Spektrallinien, Sommerfeld referred to the immense amount of information which had been accumu­ lated during the first period of 60 years of spectroscopic practice. Sommer­ feld emphasized that the names of Planck and Bohr would be connected forever with the efforts that had been made to understand the physics and the theory of spectral lines. Another period of almost 60 years has elapsed since the first edition of Sommerfeld's famous monograph. As the editors of this monograph, Progress in Atomic Spectroscopy, we feel that the present period is best characterized by the large variety of new spec­ troscopic methods that have been invented in the last decades. Spectroscopy has always been involved in the field of research on atomic structure and the interaction of light and atoms. The development of new spectroscopic methods (i.e., new as compared to the traditional optical methods) has led to many outstanding achievements, which, together with the increase of activity over the last decades, appear as a kind of renaissance of atomic spectroscopy.