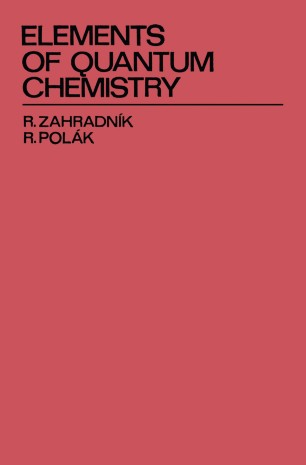 The post-war generation of chemists learned to handle a blow pipe at the university as thoroughly as modern chemistry students learn to write computer programmes. Even after World War II the rule of three was considered to be sufficient mathematical knowledge for chemists and the short course of "higher mathematics" at technical universities was the test most feared by chemistry students. However, even then some en­ visaged the theoretical derivation of information on the properties of molecules from knowledge of the bonding of the component atoms. During the last quarter of this century, amazing changes have occurred in chemistry, some of them almost incredible. Dirac's famous clairvoyant statement* has been partially realized. Incorporation of quantum mechanics into chemistry encountered numerous difficulties. After all, the reserve of experimental chemists is not surprising. For decades the hydrogen and helium atoms and the hydrogen molecule belonged among the systems most frequently investigated by theoreti­ cians. Later these systems were supplemented by ethylene and benzene. The authors of this book can therefore recall with understanding the words of the late Professor Lukes: "Well, when they succeed in computing a molecule of some alkaloid by those methods of yours ... ". Unfortunately, the calculations on calycanin were not completed before his death. Now there is no need to convince even the members of the older generation of the usefulness of quantum chemistry for chemists. Even the most conservative were convinced after the introduction of the W ood­ ward-Hoffmann rules.