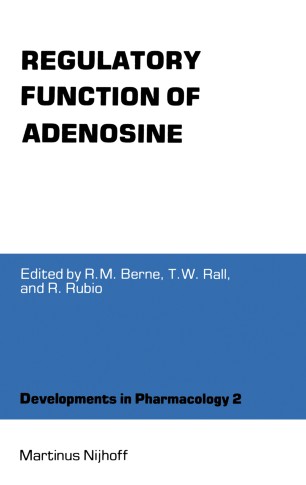 Proceedings of the International Symposium on Adenosine, Charlottesville, Virginia, June 7–11,1982

Part of the Developments in Pharmacology book series (DIPH, volume 2)

The principal objective of this symposium was to bring together investigators from all over the world who work in diverse areas of research but share a common interest in the physiologic and pathophysiologic funetions of the nueleoside adenosine. In 1978, the "International Conference on Physiological and Regulatory Funetions of Adenosine and Adenine Nueleotides," held in Banff, Canada, served as an effective catalyst in enabling scientists with differ­ ent points of view to exchange information and ideas on this subject. Since 1978, the amount of research on different as peets of adenosine metabolism, mechanism of action, transport, and function in various tissues (in both nor­ maI and abnormal states) has increased exponentially, and there was an urgent need for another meeting for updating information on this burgeoning subject. The focus of the meeting was extremely sharp, but the scope of the subject material was very broad. Scientists categorized as chemists, biochemists, physiologists, pharmacologists, and immunologists, working with cells and eelI fragments, with tissues such as heart, brain, musele, fat, kidney, and with human beings having immune deficiency diseases participated in the sym­ posium. They had an opportunity to air their differences, reinforce their areas of agreement, and, most important, they educated each other with respeet to research on adenosine; it is hoped that they also enriched their own research programs from the information they gained from their fellow participants.