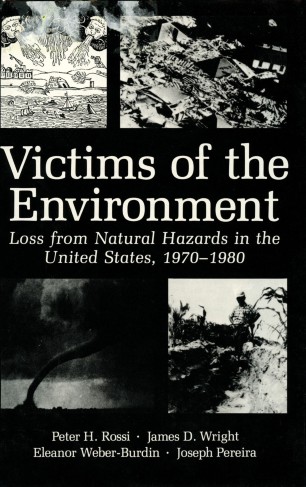 Victims of the Environment

The research reported in this volume was designed to provide estimates of the extent of damages and injuries from certain natu­ ral hazards inflicted on households in the United States. In addi­ tion, it reports on sources of aid proffered to households and the extent to which there are differences among households in the receipt of help. This volume represents the latest installment in a series of monographs stemming from the Social and Demographic Re­ search Institute's (SADRI) program of research on the effects of natural hazard events in the United States. The first volume in our series (Wright, Rossi, Wright, & Weber-Burdin, 1979) reported on the long-range effects of natural hazards on the population and housing stocks of neighborhoods and communities. The second volume (Rossi et aI. , 1982) assessed the support for hazard mitiga­ tion policies existing among local and state political elites in a sample of states and local communities in the United States. The main findings of these two monographs can be summarized as follows. First, long-range effects (up to 10 years postevent) of nat­ ural hazard events are minimal: Local communities and neighbor­ hoods that have been impacted by floods, tornadoes, or hurricanes appear to be no different in their population and housing growth patterns over the period 1960 to 1970 than comparable commu­ nities that went unscathed. Apparently, household and communi­ ty resources plus outside aid were sufficient ordinarily to restore impacted areas to normal growth patterns.