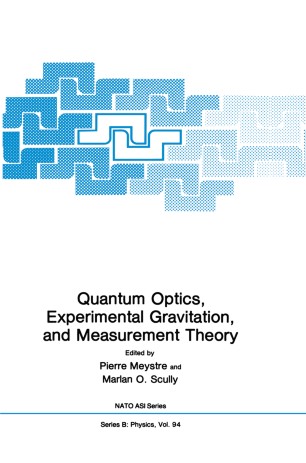 This volume contains the Proceedings of the NATO Advanced Study Institute "Quantum Optics and Experimental General Relativity" which was held in Bad Windsheim, Federal Republic of Germany, from August 16 to 29, 1981. At first glance, one might wonder why a meeting should cover these two topics, and a good bit of quantum measurement theory as well, all of which seem to be completely unrelated. The key to what one may call this grand unification lies in the effort, underway in a number of laboratories around the world, to detect gravitational radiation. Present research is pursuing the development of two types of detectors: laser interferometers and resonant bar detectors. Be­ cause the signals that one is trying to measure are so weak the quan­ tum mechanical nature of the detectors comes into play. The analy­ sis of the effects which result from this is facilitated by the use of techniques which have been developed in quantum optics over the years. This analysis also forces one to confront certain issues in the quantum theory of measurement. The laser interferometer detectors, using as they do light, are clearly within the realm of subjects usually considered by quantum optics. For example, the analysis of the noise present in such a de­ tector can make use of the many techniques which have been developed in quantum optics.